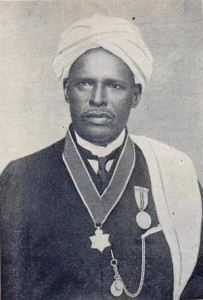 The Digital Library of India (DLI) project, an initiative of the Central Government, aims at digitising significant artistic, literary and scientific works and making them available over the Internet for education and research. Begun in 2000 by the Office of the Principal Scientific Advisor to the Government of India and later taken over by the Ministry of Electronics and Information Technology, it has to date scanned nearly 5.5 lakh books, predominantly in Indian languages.

A treatise for the Season

The December Music Season, one of the city's most awaited events is just around the corner. Commemorating this annual celebration of classical music that draws audiences (and performers) from across the world, the book featured in this issue is a treatise, is just over a century old – Karunamruthasagaram by Rao Sahib Abraham Pandithar.

Born in 1859 in the village of Sambuvarvadakarai, then part of the kingdom of Travancore, Abraham Pandithar had his early education at Surandai in Tirunelveli District and after training at a Normal School in Dindigul, became a teacher in 1877. He was from a family that was well versed in ancient Tamil medical literature and practised 'native medicine'. Hence, it was but natural that he wished to pursue the same. He became a student of a mendicant, Karunananda Swamy, who, impressed with his dedication and ideals, taught him the intricacies of medication and also gave him several ingredients, drugs and formulations to prepare medicines for various ailments. Pandithar went on to have a flourishing career as a practitioner of 'native medicine' in Tanjore, with his Gorosanai pills in particular being extremely well-known not only in India but also in places such as Ceylon, Burma and the Strait Settlements.

It is, however, for his contribution to the world of Carnatic music that Abraham Pandithar is best remembered today. He formally learnt music from Dindigul Sadayandi Bhattar and western classical music from Tanjore A.G. Pichaimuthu Pillai. His interest in Carnatic music led him to delve deeper into various theoretical aspects. He cultivated close friendships with several top Carnatic musicians of the times, such as Konerirajapuram Vaidyanatha Iyer, Tirukkodikaval Krishna Iyer and Harikesanallur Muthiah Bhagavathar.

In 1912, the Governor of Madras, Lord Carmichael, visited Tanjore and a reception was organised in his honour, where eminent musicians took part. Pandithar proposed the formation of an organisation that would undertake research and debate on various topics connected with Carnatic music. Amongst its objectives were the establishment of an academy to teach South Indian music, conduct examinations for students and give them degrees, and reward distinguished performers with medals and citations. Thus, was formed the Tanjore Sangeetha Vidya Mahajana Sangam, with the Raja of Ramnad, and the Maharajah of Indore among others, as its patrons.

The first meeting of the Sangam was held in May 1912 at the Karunanidhi Medical Hall, Pandithar's clinic. It was the first music conference of its kind. In all, the Sangam met six times, until October 1914. The proceedings and deliberations of these conferences were published as Karunamruthasagaram in 1917 by Pandithar at his own expense. The printing was undertaken at the Lawley Electric Printing Press which had been established by Pandithar at Karunanidhi Medical Hall with machinery specially brought from London.

Karunamruthasagaram was conceived as a series of publications, with the first book titled On Srutis. Divided into four parts, the book traces in brief the history of Indian music, before going in depth into the structure of 22 Srutis. Abraham Pandithar also voiced his support for the Lemurian theory in this book and stated that the lost land of Lemuria was the cradle of the human race and that the language spoken by its inhabitants was in fact Tamil. A particularly interesting section of the book contains a list of people acknowledged by Pandithar to be experts in South Indian music with a brief note about their accomplishments.

In the concluding portion, Pandithar introduces the second book in the series, intended to be on Ragas. That was as far as he got, for he passed away in August 1919. He was buried in his experimental farm, Karunanandapuram (referred to by locals as Pandithar Thottam) on the outskirts of Tanjore. The road leading to the Karunanidhi Medical Hall was renamed Abraham Pandithar Road. Today, his legacy lives on through the music conferences of various organisations, for they largely follow the blueprint laid by him in the proceedings of the Tanjore Sangeetha Vidya Mahajana Sangam.